My experience of Beaujolais wine was, for a long time, restricted to the cheap, fruity low-alcohol plonk in the floral-labelled bottle marketed by Georges Dubœuf. The stuff we naïvely labelled “Beaujo” and would lug to barbies and student pissups as a ‘sophisticated’ alternative to a sixpack of stubbies. Geez, those were the days.

Over the years I focused my attention on the other ‘B’s – Burgundy and Bordeaux – but I always suspected there was a lot more to Beaujo than met my innocent eyes. All I really knew was that Beaujolais was made from the Gamay Noir grape, a thin-skinned derivative of the more esteemed Pinot Noir of Burgundy fame. That was about my limit. So, on a visit to France and Porte Rouge, our pied-à-terre in Burgundy, my relative ignorance of the wines of Beaujolais got the better of me and I resolved to investigate the region and its wine.

We took the advice of Sheila, our neighbour in Sivignon, and commenced our studies in Romaneche-Thorins, a small town on the Autoroute du Soleil about 60km north of Lyon. Here we paid a visit to Le Hameau Dubœuf, a veritable theme-park of wine established by Beaujolais industrial-sized negociant (wine trader) Georges Dubœuf. And it’s an eye-opener.

The first thing I learned is that there really is a Beaujo. Actually, it’s called Beaujeu, and it’s a small town up in the hills to the southwest, and is the historic capital of the Beaujolais region. Secondly, I discovered there isn’t a single Beaujolais style wine; there are, in fact, 12 appellations (‘official’ wine-producing areas) each producing distinctly different character wines from different soil structures.

As the Dubœuf juggernaut sources product from each of the 12 appellations, it seemed the perfect venue to line up a sample of each for a spot of comparitive tasting.

Of course, as a serious law-abiding driver I wasn’t tempted to indulge, especially at 9.30am, but we did pick a sample bottle from a few appellations for more in-depth research over dinners back at Porte Rouge.

Aware that the wines were produced on an industrial scale we weren’t entirely convinced that the Dubœuf product was representative of boutique growers, but we had to start somewhere.

On leaving the Hameau (hamlet) we drove further down the A6 toward Lyon and turned off at Villefranche-Sur-Sâone and joined the Route des Vin du Beaujolais in the very heart of the basic appellation.

Once through to the outskirts of Villefranche the countryside unravelled into a sea of vineyards to every horizon. This is the region where the basic “entry-level” AOC Beaujolais is produced, and on a staggering scale.

Given the number of producers and the speed at which Beaujolais Nouveau (new Beaujolais) is mass-produced (just a few weeks after picking), the region has a reputation for delivering wines of “varying quality”. In fact there have been episodes of  destruction of millions of unsold bottles designated “vin merde” (shit wine) by an often-disappointed market. And this stuff was my ‘trophy plonk’ to impress the chicks at student parties. I’m suddenly very embarrassed.

We journeyed northwest through oceans of vineyards and into the appellation (AOC) Beaujolais-Villages. Wines from this region have a slightly more consistent reputation than their cousins down the road, but don’t qualify for the Cru (Grand) status of the ten appellations we were approaching. At least the wines from Beaujolais-Villages gets the benefit of some bottle ageing. If you consider six months adequate time for bottle maturation.

Our meanderings led us higher up the slopes of the Monts Beaujolais and we wandered through tiny villages surrounded by acres of grape vines. We passed through the township of Beaujeu without stopping to inspect the medieval church at its heart, the single road through town was so narrow parking would be problematic at best, and at around 1pm we lobbed into the town of Villie-Morgon at the heart of the Morgon wine appellation.

A quick run through town revealed just one obvious eatery, a small bistro beside a park, opposite what seemed to be the local mairie (town hall) on rue Beaudelaire. And so l’Atelier de Cuisinier was graced with our custom. 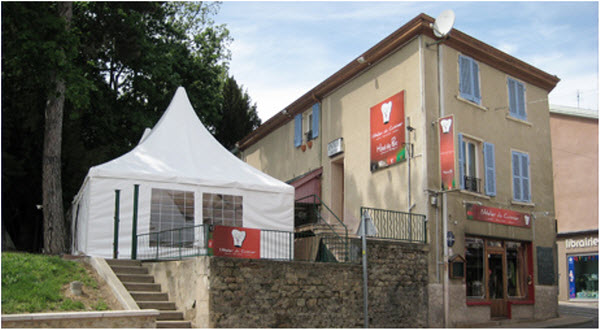 The Atelier du Cuisinier in the township of Villie-Morgon

A Michelin decal adorned the front door, raising expectations of a memorable meal. We were led upstairs, through an airlock and offered a table in the window of a canvas pavilion overlooking the mairie across the road.

As we were led to our table by a harried and perfunctory waitress, I glimpsed a chalkboard menu above the bar and began to anticipate the challenges of selecting a meal from the wide selection of entries. It was only when the waitress returned and slapped down a pot (500ml carafe) of red did I realise the chalkboard menu was actually a menu du vin and we were about to partake of a fixed no-choice lunch, identical to the one facing the 2 dozen other patrons around the room. 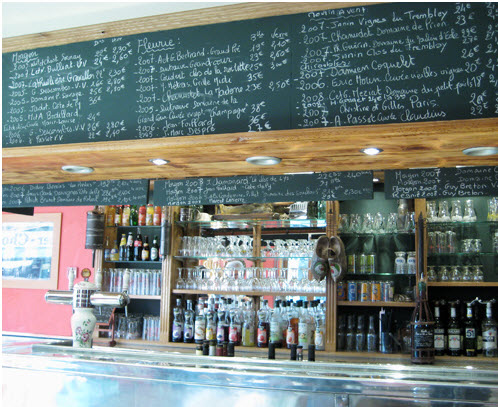 The wine list I first thought was the bistro menu

Ordinarily, I’m a fan of the menu formule approach. It’s a safe bet the dishes represent the freshest and best of local produce, cooked simply and well for a discerning regular clientele, and generally at very affordable prices. Perfect for an eat-‘n-run  when you’re exploring new territory.

Within seconds of being seated the first courses, a tranche of chicken and pistachio terrine were dropped on the table with an accompanying scowl from the waitress, who spun on her heels and stormed off to upset new walk-ins at the door.

Sipping the wine, which turned out to be a silky full-bodied drop from the nearby appellation of Fleurie, we settled into the tasty though sparsely-plated terrine and debated whether to risk asking for a carte to select the rest of the meal.

Our questions were answered a few short minutes later when the empty entree plates were whisked away and replaced with  heaped bowls of penne pasta in a thick cheesy Alfredo sauce by our scowling hostess who stood back with hands on hips and glared. I didn’t take her approach personally, having already noted she treated every table with an equal measure of bile.

I preface following comments with an admission of admiration; the pairing of the wine with the cheesy-creamy Alfredo sauce was brilliant – showing an inspired understanding of the flavour profiles of both. But after ten minutes of diving into the heaped bowl with barely making a dent I was completely, utterly over it. And no litreage of  wine down my throat could ease the passage of the cheesy mess that coagulated in the bowl as it lost heat. Yet Michelle’s bowl was virtually empty.

Fearing I might end up wearing it from the hands of our charmless hostess, the dilemma of the pasta occupied a tense fifteen minutes until an adjacent table was vacated by a party much braver than yours truly, and I was able to switch bowls before Madame Lash returned to clear both tables.

Slumping back in relief and self-congratulations at my quick-thinking dexterity, the obligatory cheese dish arrived on our table in the manner of a skipping stone on a millpond. Fortunately, it was relatively easy to deposit most of the cheese in a handbag while ostentatiously nibbling small shards with appreciative nods and whispered words of smugness. Pretty soon we seized an opportunity to make our escape while the hostess was preoccupied with making another table cry, and we bolted for the door, paying for our meals at the bar downstairs.

Back in the car our Beaujolais discovery continued as we proceeded northwards through the various appellations, though the shine was taken off the journey by the leaden lump of pasta in my belly and frequent glances in the rearview mirror to detect any pursuing hostess.

The landscape was a patchwork of individual plots of vineyards characterised by a pinkish limestone gravel and we stopped into a selection of vineyards advertising an English-language service for a brief tasting and purchase of a bottle to complete our collection of samples from every Cru appellation. We didn’t bother with the AOC Beaujolais or Villages appellations – you can pick those up at Dan Murphy’s for just a few bucks. The Beaujolais Cru variants aren’t labelled as Beaujolais, just their appellation, and they’re very hard to find in mainstream wine retailers back in Melbourne.

Over the next few nights we dined-in at Porte Rouge, on fresh local produce purchased at the markets of Louhans and Cluny selected to pair with individual Beaujolais Crus as recommended by the winemakers. I developed a healthy respect for the various Cru wines of Beaujolais and if you’re anyway interested I’ll post a tasting report over the next few days.

← Wahaca – Day of the Dead
Copping it sweet, mostly →