Rocketing along the Extraterrestrial Highway

If you ever find yourself in south-central Nevada with a day to spare, you could impress your friends with stories of your drive along the Extraterrestrial Highway.

Here’s my version of an impressive tale. I hope to read yours soon.

It all begins in a small town called Caliente in central Nevada, about 240km north of Las Vegas. I think the locals have a pet name for Caliente because I overheard a local lassie on her mobile phone during lunch and I distinctly recall her saying she was “in a bar in Bumfuck Nevada”. Personally, I’m not so forthcoming, though the town is fairly nondescript and miles from anywhere, it does have a very impressive Spanish Mission style railway station.

Anyway, it’s Saturday 1pm and we’re sitting in a diner called The Brandin Iron (sic) munching on the ubiquitous burger and fries as the locals come and go enthusing about that night’s football match between Caliente and a team from one of the military bases dotted throughout the vast Nevada Test and Training Range separating Caliente from Las Vegas.

How we’d come to be in Caliente is the subject for another day, but this afternoon we’re plotting our route to the Sierras in California, thinking we’ll get to Mammoth Lakes to find a hotel just before nightfall if we play our cards right. So, with our enormous Rand McNally Road Atlas spread on the table soaking up ketchup and Coors lite (aaaaargh) Michelle marks our intended route in bright yellow highlighter.

As the crow flies, the distance to Mammoth is about 330km due west, but as one of the world’s largest and most secretive military base and nuclear testing sites is in the way, a slight detour is necessary. This detour takes us along the Extraterrestrial Highway and adds about 200km to the trip, making a timely arrival in Mammoth Lakes problematic.

By 1.30pm we’re back in SUSOW* and heading southwest down Route 93 towards Las Vegas at a speed that keeps us just inside the law and out of the watchful gaze of frequently passing Highway Patrol cruisers. We missed the cunningly hidden right turn on Highway 375 about 60km down the road and it was only twenty minutes later we realised we had overshot our turnoff.

Hanging a U-turn just seconds before another Highway cruiser appeared over a ridge 2km behind us we returned towards Caliente. At Crystal Springs we finally noticed the hidden sign to Highway 375 and turned left just before the cruiser overtook us. We’re now officially on the Extraterrestrial Highway. 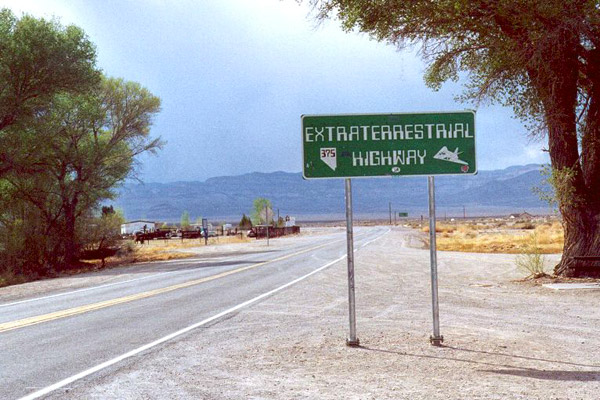 The first sighting of the Extraterrestrial Highway

History of the Extraterrestrial Highway

According to Wikipedia “State Route 375 (SR 375) is a state highway in south-central Nevada in the United States. The highway stretches 98 miles (158 km) from State Route 318 at Crystal Springs northwest to U.S. Route 6 (US 6) at Warm Springs. The route travels through mostly unoccupied desert terrain, with much of its alignment paralleling the northern edges of the Nellis Air Force Range.”

The Highway received its current name in 1996 in an apparently secret deal between the then Governor of Nevada and 20th Century Fox movie studios in LA as a promotional tool for their upcoming movie “Independence Day“. According to studio backgrounding  the film takes place partly at “Area 51,” although it’s very unlikely this facility resembles the real thing. All of the parts of the film supposedly taking place in Nevada were filmed in Utah and California.

Ominously, Wikipedia continues …”The top-secret Area 51 government base is near SR 375 and many travelers have reported UFO observations and other strange alien activity along this road. Such stories prompted the state to officially name the route the Extraterrestrial Highway in 1996. The small town of Rachel, located near the center of the highway, caters to tourists and UFO seekers with alien-themed businesses. Although the area receives some tourism due to alleged extraterrestrial activity, SR 375 remains a lightly traveled route.”

Putting aside conspiracy theories and general crackpottedness, it is believed that Area 51 was a testing ground for groundbreaking technologies such as stealth bombers and prototype weapons and aircraft, largely due to its isolation from anywhere remotely populated. Observers would note strange aircraft not previously seen which would be reported and recorded (quite correctly) as Unidentified Flying Objects (UFOs). One thing leads to another and pretty soon we have an alien invasion in the manner of Plan 9 from Outer Space. The fact that the federal government set up layers of no-fly zones and intensive security procedures only added fuel to the conspiracy theories and elevated Area 51 to cult status.

By now, it’s mid-afternoon and we’re literally in the middle of nowhere with only a top-secret military base and the prospect of abduction and anal-probing by passing ETs to relieve the monotony of the drive. On the brighter side, however, we are on the Extraterrestrial Highway, a road-less-travelled, and the potential for running foul of the speeding laws is considerably diminished. So far, we had stuck religiously to the posted speed limits only very occasionally taking the Nitro past the 75mph maximum legal speed.

Apart from being a law-abiding visitor to the USA, the main reason for sticking to speed limits was the sheer terror of driving the SUSOW. It’s a heavy, ungainly gas-guzzling box of sheetmetal with the personality of Freddy Kruger and the left-leaning attitude of Pol Pot. And any vehicle that consistently lurches to the left on the roads of the US of A is a vehicle that should be trashed immediately.

I’d read a small brochure about the Extraterrestrial Highway in the café in Caliente, and apart from the Roswell alien supposedly interred at Area 51, the other stand-out mention was the signage indicating the speed limit was Warp 7. I took this as carte blanche to wind up the SUSOW on the downslope of the first of many mountains we crossed and the Nitro hurtled down the road into the Tikaboo Valley at a white-knuckle 90mph. 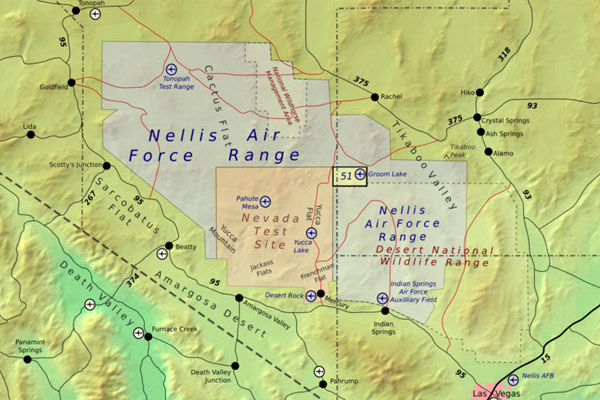 While not exactly Warp 7 (and I never did see such a sign)  our speed was well outside the ability of the car to cope. It lurched over the tiniest bumps, pulling violently to the left and the wind-noise drowned out any music coming from the ipod.

I let the tank slow to a more manageable 80mph, locked in the cruise control and let the monster run its own race.

The road rose and fell over a succession of ridges and the Nitro chewed up the miles almost as fast as it slurped gas. The desert was barren on both sides, with nothing of interest to be seen to the horizon. And no roads or tracks led off to the left in the direction of the Air Training Range.

After about 40 minutes we encountered our first vehicle as we crested another rise and commenced the long downhill ride to Rachel, the tiny community at the midpoint of the Extraterrestrial Highway. 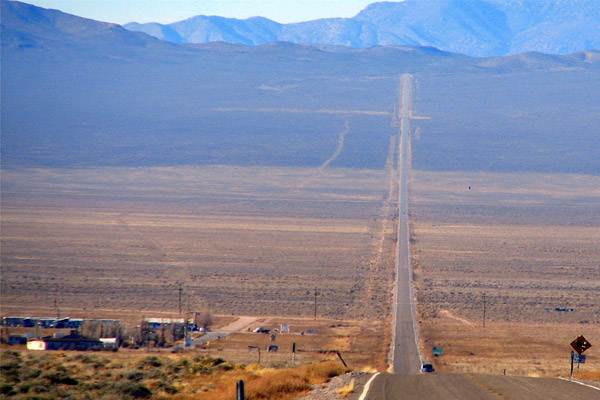 Approaching the tiny town of Rachel at the midpoint of the Extraterrestrial Highway.

I decided to take a ten minute break to relax our nerves and let the other car make some headway unassailed by the SUSOW so we pulled into Rachel and stretched our legs.

Rachel is a long way short of being called an “attractive” town;’ it’s little more than a  motley collection of discarded trailers. Even the “motel” is just a cluster of mobile homes and the “Area 51 Research Facility” a gaudy yellow caravan.

But the locals have got the whole “alien” schtick down pat.

There’s a tow truck out front of the local known as “The Little A LE INN” with a “flying saucer” suspended from it’s crane and the whole place is awash with kitschy alien souvenirs. Perfect for passing intergalactic geeks on a mission.

Having noted that, an overall feeling of “I’m being watched” still pervades the area. I had the same feeling some fifteen years earlier when on a similar expedition through Death Valley on the southwest corner of the Testing Range with Mitch and my mate Ding, we stopped for a “nature break” in the Amargosa desert and I had the compelling feeling my micturations were being recorded by unseen eyes. 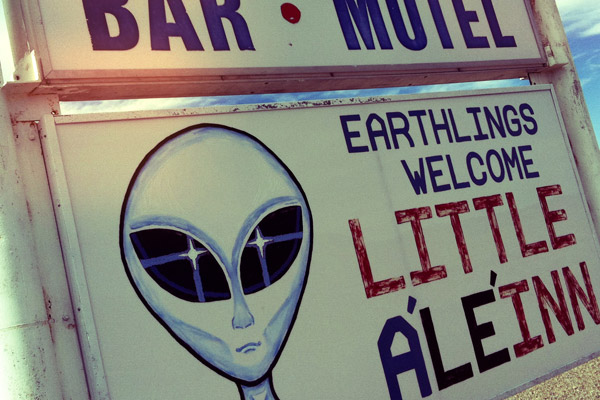 It’s great to know that earthlings are welcome

We weren’t tempted to settle in for an alien snack or pan-galactic gargleblaster and pretty soon we were back in the car heading northwest towards Warm Springs and the junction with Interstate Highway 6 – the end of the Extraterrestrial Highway.

Unfortunately, the junction at Warm Springs will only mark the halfway-stage of the day’s journey.

We still have to traverse Route 6 through the town of Tonopah and cross the White Mountains through the Inyo National forest into California and a welcoming bed somewhere in Mammoth Lakes. We’re racing against the clock and nature. A cold front is descending from the north, bringing early snowfalls and the very real possibility that the Tioga Pass over the Sierra Nevadas into Yosemite National Park will be closed. And we planned to enter Yosemite through that pass the next day.

The Extraterrestrial Highway north of Rachel is somewhat flatter and straighter than the first half from Crystal Springs, so I wound up the Nitro to a bone-jarring 90mph and held on for dear life. The moment we join Route 6 our speed will be limited to 70mph maximum and there would still be 170 miles to go. Time and daylight are slipping away as we roar along through ever-lengthening shadows.

All the while on this road my eyes scan the skies for any hint of an unearthly presence. Even a stealth plane sighting would have made an entry in the brag book. Alas, other than a few stray cattle not a speck of life (in any way we might know it) was to be seen. Hell, I’d even settle for a cessna at this stage.

Thirty five minutes from Rachel we arrive at Warm Springs and veer left onto the junction with Interstate 6, farewelling the Extraterrestrial Highway probably forever. Fortunately the traffic is light and the posted speed limit is 75mph, so the 50-odd mile drive to Tonopah goes pretty quickly. We take a ten-minute break to ease the muscle tension and again climb back into the SUSOW and continue westward into the setting sun.

As darkness descends Michelle checks the road atlas for potential alternatives to Mammoth Lakes and decides that a town called Bishop might be closer, so we correct our settings and continue down Route 6 instead of diverting through the Inyo forest to Mammoth. We arrive in Bishop from the north and check in to the first ‘brand’ motel we find. It’s Saturday night and the motel carpark is awash with pickups sporting gun racks in the rear window.

We cross the road to a brightly-lit Chinese restaurant and settle in for a Tex-Mex take on simple Cantonese food (chipotle in Chinese is just plain weird). On returning to the motel we hit the sack quite exhausted. Michelle drifts off quickly, but I am  kept awake for hours by a “screamer” having a vociferously passionate romp in the next room. I intend to congratulate the bloke (I presume) from next door who was responsible for the outpourings of delight from his paramour, but when we emerge from our room next morning the carpark is empty.

*SUSOW: Sphincter-Ugly Shitbox On Wheels. The lethal Dodge Nitro rental car selected in the darkest recesses of the rental depot at Las Vegas’s McCarran Airport a lifetime ago.

← A few gratuities for Brand USA