Four years before Captain James Cook bumped into the eastern coastline of terra australis in 1770, a bloke by the name of Lefévre, purveyor of alcoholic beverages to king Louis XIV of France, purchased a grand Parisian townhouse on the left bank of the river Seine and converted it into a bar, wineshop and eatery. The precise date is obscure, but it was sometime in the 2nd half of 1766 and signalled the birth of what some regard as the oldest continuous-trading restaurant in the world.

Fast forward to 1860, in a rather louche period of French post-Revolution history, and a certain Jules Lapérouse took over the eatery, giving the restaurant its current name; Restaurant Lapérouse.

Lapérouse’s first act was to create the famous “private salons” on the first floor of the building and open up the dining room to broaden the views across the Seine to the Ile de la Cité. The famous “petits salons” or “salons privé” quickly became in great demand by the Parisian social and political élite for illicit liaisons with the infamous French courtesans of the period.

Courtesans, upon receiving their payment for services duly rendered (in diamonds) would scratch the mirrors in the private rooms to ensure that the diamonds weren’t fakes. Those scratches still adorn the mirrored walls of the salons and dining room to this day, proving that the kitchen and cellar aren’t the only source of oral pleasure in Restaurant Lapérouse.

According to curious French laws of the time, the act of adultery was not considered illegal if carried out in public places such as restaurants. So, the enterprising monsieur Lapérouse established a warren of hidden passages and stairways linking the restaurant to a former convent and back streets of the area. There is even a secret tunnel running under the quai des Grands Augustins to a landing jetty on the banks of the Seine. All these discreet improvements were built to allow high ranking officers, politicians and high society to visit the petits salons pleasure chambers unnoticed by the great unwashed. 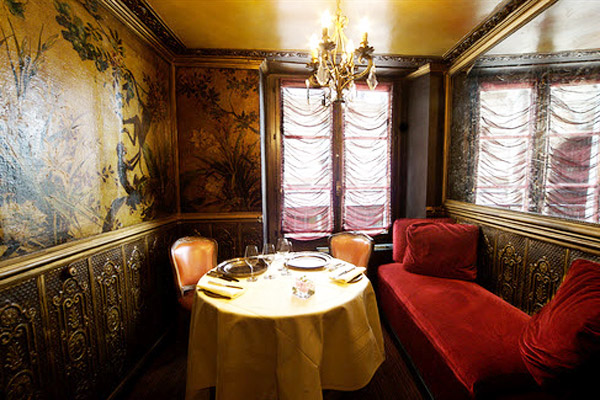 Regular restaurant patrons included literary bourgeoisie such as Guy de Maupassant, Emile Zola, Alexandre Dumas, and Victor Hugo who used to spend his afternoons in the Salon Jean de la Fontaine. Restaurant Lapérouse was also known to the international high society of the roaring twenties at the height of its fame, with names like Duke of Windsor, Aga Khan and princess Margaret on its rather exclusive guest list.

In 1907 Restaurant Lapérouse was the first restaurant ever to win three Michelin stars. It was in these kitchens that Auguste Escoffier, the king of chefs and the chef to kings, fed royalty, politicians and other A-listers while taking French gastronomy to delicious new heights.  The restaurant won three Michelin stars almost every year from 1933 to 1968 (only two stars in 1949, ’50 and ’51) and then walked away from the Michelin process in the 1970s.

Fast forward again to an autumnal Parisian day as we approach the maitre d’ station at the foot of a staircase in the newly refurbished red velvet bar and declare in an excrutiating oz- accented Franglais “Bonjour madamoiselle, un reservation pour monsieur Burns”. Clearly we were expected; ushered upstairs to the first floor main dining salon and escorted to our table pour deux overlooking the second-hand bookstalls lining the Seine.

My first thought as my eyes scanned the wood panelling, wall paintings, mirrors and elegant tables, absorbing the refined and elegant atmosphere is  “Shit! I’m not wearing a jacket”. It’s that kind of place.

Just as the waiter was decanting carafe d’eau, a horse-borne military procession trotted past our window, wheeled majestically to the right and swept onto the Pont Neuf towards the Ile de la Cité; a motorised street sweeper and washer en arrière removing all evidence of equine digestive by-products from the gleaming quai des Grand Augustins. 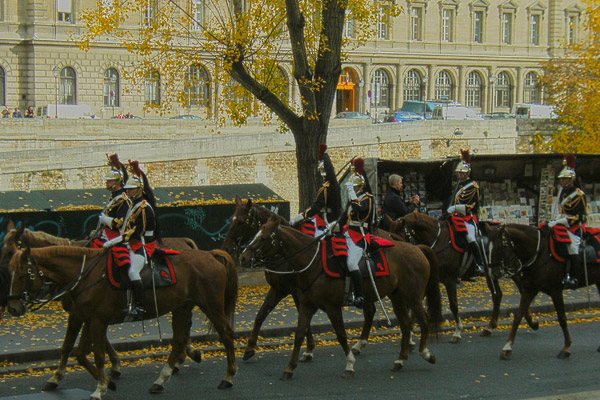 “There was no need to arrange that on our behalf, but merci beaucoup”  I quipped to the waitress who blinked in complete incomprehension and scurried off to fetch our menus.

As in most French eateries diners can select from a complete menu or choose from a limited selection in les menu du jour. At Restaurant Lapérouse the second option comes with 2 variations; Entrée and Main OR Main and Dessert for €45 or Entrée, Main and Dessert for €55. Both choices come with a glass of house wine.

Looking around the dining room it was fairly apparent that most fellow diners had taken the menu du jour route. We opted to choose from the regular menu and wine list. An expensive choice to be sure, but such history and sense of occasion don’t come cheap, especially in Paris.

Nibbling hors d’oeuvre of pencil-thin grissini and spicy dill dip we debated how best to approach the menu. I favoured the six-course dégustation at €135pp but Michelle had singled out a three-course selection and wouldn’t be swayed – and “the tasting menu can only be provided to all at the table, monsieur”. Back to the drawing board. Our ultimate choices were …

Pour Monsieur – Soft-boiled egg, in a crust of burned bread, with sea almonds and asparagus
Canapés of ortolan
Filet of Charollaise beef with roasted marrow bone 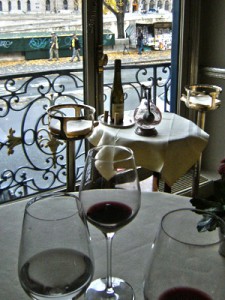 Each dish demonstrated considerable skill and imagination by combining traditional ingredients and techniques with contemporary attitudes. Flavours were bright and presentation was artful.

To wash it all down I selected a couple of half bottles – this was all about quality over quantity and we sure as hell couldn’t afford 750ml bottles.
Les Preuses Chablis Grand Cru 2008 with the first two courses  (lively, dry minerally with a long fine finish) and Arlaud Pere & Fils Charmes-Chambertin 2005  to accompany the red meat (black raspberry flesh, rosy perfumes luscious complex layers of flavour). 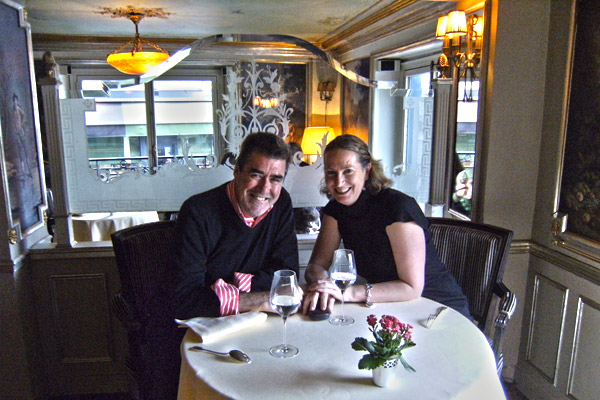 Yours Truly and The Bride at Restaurant Lapérouse

All in all it was a very memorable meal (it’s immortalised in our Amex account). We agree that we have probably had “better” meals (if you take into account a price/value equation) but the opportunity to indulge in history and gastronomy at its zenith cannot be measured in dollars alone. On the traditional Oz scoring measure of points out of twenty, I give Restaurant Lapérouse a sixteen. This would equate to two toques and a beret on the three-hat scale.

The re-opening of the downstairs wine bar late last year has propelled Lapérouse back to the top of the “be-seen” venues for Parisian glitterati and passing global A-listers. Witness our very own Nic K kicking up her heels a few short weeks ago.

LifeNotes FootNote: According to encyclopedia of gastronomy Larousse Gastronomique “In about 1765, a Parisian ‘bouillon seller’ named Boulanger wrote on his sign: ‘Boulanger sells restoratives fit for the gods’…This was the first restaurant in the modern sense of the term.”  Writer/historian Loretta Spang claims in her book “The Invention of the Restaurant” the title of first restrauteur belongs to a chap named Mathurin Roze de Chantoiseau whose 1766 establishment was set up to serve “only those foods that either maintain or re-establish health.”

As for the longevity of overall dining in Paris, I believe probably the most long-lived and acclaimed name would be Restaurant La Tour d’Argent which first appeared on the Parisian radar as “Hostellerie de La Tour d’Argent”, an inn built in 1582 as an adjunct to a convent belonging to Bernadin monks.

← Doing the Mâconnais
A few gratuities for Brand USA →