I’m not a big fan of Los Angeles. To me, the conurbation is a large collection of villages connected by a lacework of freeways with very little attractiveness or  interest in between. This often presents a dilemma as sometimes we’re in LA on a stopover with time to explore the Greater LA area, but no hire car. Other times we have a car but itineraries don’t allow time to explore too far from our favoured hotel on Lincoln Boulevard near Marina Del Rey.

Despite my general disinterest in LA, I admit to being a raving fan of the contemporary crime novelist, Michael Connelly. Other than having a personal affinity for some of the idiosyncrasies of his lead character Detective Hieronymus (Harry) Bosch, I enjoy the raw, gritty but immensely entertaining pictures of LA that Connelly paints, and we’ve made it a bit of a life challenge to pay a visit to as many of his crime ‘locations’ as possible.

Can you spot a recurring theme?

Recently, in LA with a free day and a rental car at our disposal we decided to drive out to Camarillo outlet mall to stock up on life’s essentials at bargain discount prices. We jumped in the Dodge Nitro, that sphincter-ugly shitbox-on-wheels that had carried us through four states and almost 6,000km in terror and utter discomfort without somehow managing to get us killed, up Route 60 where we took a left on to the San Diego Freeway until we hit Ventura Freeway in Sherman Oaks and turned left again. En route I spotted a sign pointing to Mulholland Drive and another iconic Harry Bosch destination sprang to mind.

Camarillo Mall is a feedlot for the taste-challenged, but you can pick up some real bargains if you know where to look. So, we loaded the back of the Nitro with bags from Rockport (me), Levis (bro-in-law), Banana Republic (both Mitch and I) plus several other labels and proceeded back down Ventura Freeway toward LA with plans for a detour along Mulholland Drive and a dusk view of Los Angeles as a visual treat before dinner on Sunset Strip.

Feeling adventurous, I turned right off Ventura Freeway onto the prophetically named Lost Hills Road, figuring if I headed west, up into the Santa Monica Mountains, I’d eventually intersect with Mulholland Drive. After a few miles we encountered a T intersection at Las Virgenes Road and I turned right, due west, into the blazing fury of the sun setting over the Pacific Coast.

This section of the road climbs up and down stark rolling hills punctuated with twists and switchbacks and each time we crested a rise in the mountains we were dazzled by the setting sun and headlights of vehicles returning to the ‘burbs after a day on the beach at Malibu. Slowing down to be sure we didn’t miss a turn we finally spotted a Mulholland Drive sign partially obscured by overhanging branches. Relieved, I slowed and turned right onto Mulholland just as a peloton of Harleys came over the ridge and roared up the road we had just left.

The road rose and fell through an endless serry of hills and switchbacks; landscapes I was thoroughly sick of after driving 6,000km through wineries and national parks in Arizona, Utah, Nevada and California, and still very little in the way of scenic panoramas of the sprawling LA basin. We crossed several roads, none of which had a familiar name and the miles ticked over on the speedo. Finally, as darkness became total and the feeble headlights of the Nitro struggled to light the road I noticed a stream of headlights crossing our direction of travel a couple of miles ahead just as a sign appeared indicating Leo Carrillo Beach dead ahead.

Leo Carrillo? wasn’t he Cisco, or maybe Pancho, on television all those decades ago?

We hit the Pacific Coast Highway five minutes later, and turned left into the stream of traffic returning to LA. We had met the coast about ten miles northwest of Malibu after an hour driving the wrong way along Mulholland Highway. If I had turned left at ‘Harley Central’ we would have eventually morphed into Mulholland Drive and the desired twilight vista of Los Angeles. 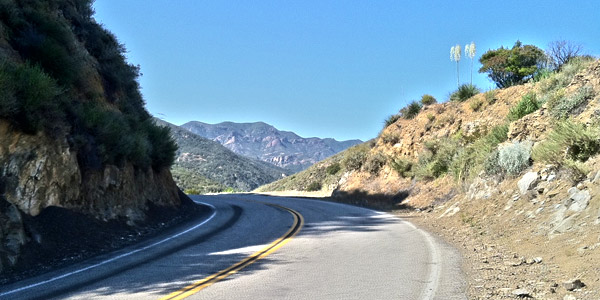 Mulholland Highway – the view we had 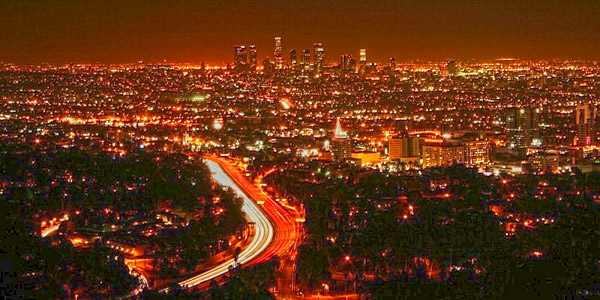 Los Angeles at dusk from Mulholland Drive. The view we wanted.

← The Art of Modern Restaurant Dining
The Pisco King →