Four hundred km south of Paris and 75km north of Lyon, the small city of Mâcon on the west bank of the river Saóne is the southernmost outpost of the French region of Bourgogne (Burgundy) and the capital of the department Saóne-et-Loire.

A population of 35,000 swelled by two recently when we sat in a cafe on Esplanade Lamartine to plan a day’s drive through the Mâconnais  with firm plans to visit vineyards and sample the region’s gastronomic delights. We’d left our residence, Port Rouge, in the tiny hamlet of Sivignon about 35km to the west, and drove into the rising sun as the vapour trails of a hundred aircraft criss-crossed the clear blue skies above the French alps.

Sipping café au lait while waiting for Mâcon’s ‘peak hour’ to subside we spread the latest Michelin tome across the table and planned our route for the day. We soon headed south on the N6 highway, stopping in a Carrefours in Mâcon Sud to stock up on baguettes, cheese, patés and terrines for ‘second breakfast’ an hour or two later.

A few kilometres down the road, at the small town of Charnay-les-Mâcon, we turned left onto Route D17, Route des Cluny. 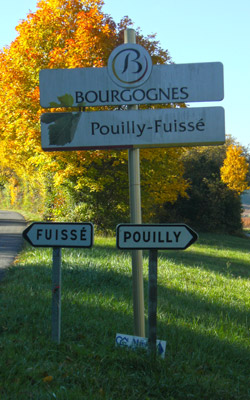 Which way to go? Left or Right?

There are eight designated wine routes in the Mâconnais/Beaujolais region and this day we plotted a variation of route 7 – a relaxed 25km amble through the Pouilly-Solutre region that would give us ample scope to indulge in the five terroirs of Pouilly Fuissé.

First stop was at Cave de Charnay-Lès-Mâcon, a wine co-op representing about 70 winegrower members in the region that markets the premier appellations of the Mâconnais wines;

Mâcon-Charnay Blanc – Pale gold wine, well-rounded in the mouth, with aromas of honey and white blossom such as acacia.

Viré-Clessé – Gold with green overtones, very fresh with varied aromas of white peach, and acacia blossom, this wine is both lively and fresh, very round with a subtle fragility.

Saint-Véran – An ash gold color, very fresh, round, quite complex, with varied aromas of honey, white flower, peach or citrus, this wine is both tender and fruity.

Pouilly-Fuissé – A dry white wine, of a gold color tinged with green, with aromas of fruit from subtle honey and citrus associations, giving a very rich and high quality wine.

Mâcon-Charnay Rouge – With its red fruit aromas, such as blackcurrant and raspberry, this wine is round, supple and very fresh in the mouth.

Beaujolais Villages – Made from Gamay grapes, with purple hues, this wine is fresh in the mouth with aromas of strawberry and raspberry.

Saint-Amour – Also made from Gamay grapes, dark red with purple hues and the scent of violets, blackcurrants and blackberries, this wine is slightly oaky in the mouth, with spicy and peppery tannins adding structure.

and the delightful Crémant de Bourgogne – With its fine and persistent bubbles, this wine is generous on the palate, with soft and fruity aromas.

We chose a bottle of each style to add to the guest cellar at Porte Rouge and drove on to Prisse, where our route took us off the main highway and plunged us down into the heart of Pouilly Fuissé chardonnay country where they have produced wine since the Roman occupation in the 3rd Century.

LifeNotes Tip: Don’t confuse Pouilly Fuissé with Pouilly Fumé. It sometimes happens because both wines are white and come from the general central-east area of France. Pouilly Fuissé is chardonnay from Burgundy and Pouilly Fumé is sauvignon blanc from the Loire valley.

There are four villages in the appelation of Pouilly Fuissé; Chaintre, Fuissé, Pouilly-Solutre and Vergisson, in an area roughly 10km N-S and a about 6km E-W, so we aimed for the most distant (Vergisson) and commenced our meanderings after stopping for second breakfast at a roadside park. Our plan was to taste just one sample from each of these villages in an effort to determine the characteristics of each terroir within the appelation.

Vergisson – mineral driven, punchy with acidic backbone.
Solutre – mineral driven but softer with pronounced acidity.
Pouilly – Good harmony of mineral and fruit – probably the most balanced.
Fuisse – More fruity, does not have the minerality of the previous three.
Chaintre – Fruit dominant.

It seemed the further south you went, the ‘fruitier’ the wine became, as the limestone of the norther ridges made way for the gentler south-east facing slopes in the south.

We stopped in Solutre for lunch in a small restaurant named La Courtille. Not overly hungry thanks to 2nd brekkie, we chose a main course each – Fillet of Charolais with bone marrow and green beans pour moi, and Foie Gras half cooked in late harvest Viognier with toast and a jammy fruit concoction of indeterminate provenace for M. Supported by a glass each of Michel Lapierre “Old Vine” (90+ years) Pouilly Fuissé, both dishes were delicious. 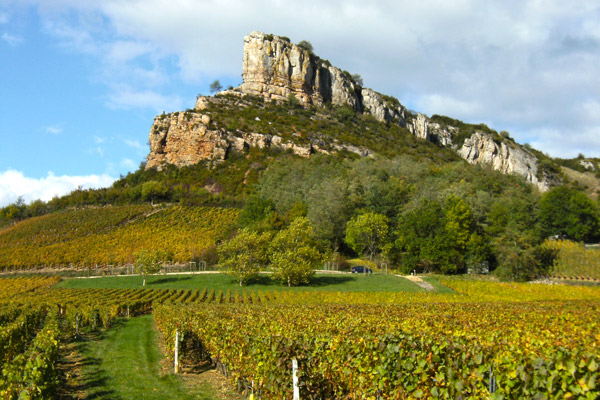 We walked off the late lunch at the Departmental Museum of Prehistory at the base of Le Roche Solutré. The museum displays the collections of one of the richest prehistoric sites in Europe: a popular hunting site for more than 25 000 years by men of the Upper Paleolithic era (35 000-10 000 BC.)  There’s the option to climb to the peak some 450m ASL, but I manfully declined.

The last visit for the day, was to Chateau Chasselas to learn if there was any possibility of someday emulating my heroes…