A cat with schadenfreude

I live in an apartment on a major arterial route in Stonnington; an inner-city suburb of Melbourne, with my wife and fur-kid Macchiato. A tram passes our door, which means that, during peak hours, the road is designated a clearway  and parking is forbidden so that traffic flows as smoothly as possible and trams can (theoretically) pass unimpeded.

The afternoon no-parking times, which apply on the opposite side of my street, are from 4.30pm to 6.30pm and are strictly enforced by council officers who issue on-the-spot fines and a towing company authorised to tow away infringing vehicles whether fined or not. I understand the fee to recover a towed vehicle is over $300, plus the value of the council-issued fine.

My neighbourhood and surrounds is notorious for the number and variety of sports utility vehicles (aka bloody annoying 4WDs) on the streets, in fact an adjoining suburb was the genesis of the pejorative “Toorak Tractor“. The relative dearth of off-street parking, and the potential financial windfall from towage fees has encouraged the tow-truck drivers to lurk in side streets, poised to swoop onto Clearways at the instant their watches show 4.30pm.

I make no secret of my intense dislike of hulking Toorak Tractors on our cluttered roads, but my plaintive cries of “piss off” are lost on the ears of Armadale yummy mummies as they shuttle young Tiana and Cole to private school in their shiny black European marques before invading my regular haunt cafes for a soy latte and Belgian chocolate cookie or three.

Yesterday afternoon I gave Macchiato (the fur-kid) his customary daily grooming on the balcony of our apartment. This is a ritual intended to cut the amount of snow-white fur he is prone to shed, and in so doing decrease both the frequency of carpet vacuuming and potential for furball-coughing. When I completed the cat’s ablutions I left him on the balcony, went inside, popped the lid on a stubby of brew and settled on the couch to watch the Sri Lanka – Australia cricket.

I was woken several minutes later by the cat tapping on my shoulder (at least he wasn’t tapping my nose – his favoured way of waking me for his breakfast at 5.30am). He had re-entered the apartment through the slightly open window he uses as personal portal to the world, and was intent on rousing me from my slumber. Once I stirred he barked a command, promptly disappeared through the window and leaped back onto the balcony wall. Curious, I ventured outside to see what was disturbing him.

I swear the little bugger was smirking. Bless him. 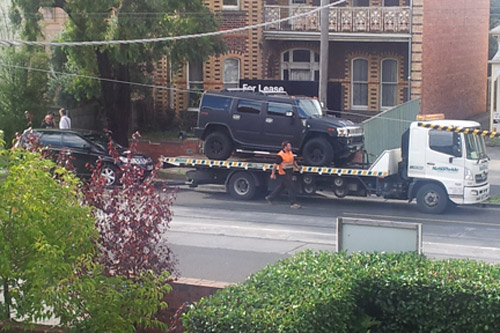