The Art of Modern Restaurant Dining

Six months ago Michelle and I had dinner at The Modern – the flagship restaurant of the Museum of Modern Art (MoMA) in New York City. It was a day, pretty much like any other, if your typical day includes…

We planned our ‘elopement’ a few months earlier when deciding to visit the States instead of returning to Europe to fritter away days in the vineyards of Côte de Nuits, as a welcome diversion in the interregnum between cancer treatments, and a convenient way of avoiding the hassles of a traditional wedding ceremony. We certainly wanted to return to New York – a city we both love and wellspring of many enduring memories.

I chose The Modern for our wedding breakfast-for-two because we wanted a memorable meal in an environment a little “out of the ordinary”. Per Se would have been nice too, but who can afford a meal at a Thomas Keller restaurant with a table pricing policy roughly equivalent to a Melbourne-LA return economy airfare? Certainly very few in the circles we move in.

The Modern is a corporate restaurant, one of a stable of a dozen uniquely NYC diners, including the elegant Gramercy Tavern, owned by The Union Square Hospitality Group. It was awarded one Michelin star in 2011 and holds a top 3-star rating with the New York Times.  With the credentials of this restaurant supporting my selection, I booked online for an October Thursday night at 7pm.

The Thursday came; haircut and wedding ceremony duly completed, celebratory champagne toasts at a 34th St. bar and txt messages announcing nuptials despatched, we returned to our hotel to dress for dinner. I’d even bought a new suit the previous day just for the event. At 6.30pm, dressed in our finest and Michelle looking gorgeous, we took the lift to the ground floor and stepped out onto 5th Avenue into a torrential downpour of Niagaran scale.

If it had been raining virgins, we’d have been washed down the gutter with a same-sex couple.

The sidewalks were swarming with pedestrians, every cab in the midtown zip code had an ‘occupied’ light and our borrowed umbrellas collapsed under the pressure of rainfall. In very short time we were drenched to the bone. After a series of  tips to bellboys at a nearby hotel we managed to find a cab and we took off to MoMA, the post-7pm minutes ticking away. Our route took us up 6th Avenue to W54th St, where we turned right and midway along the block was the welcoming portal to the Museum of Modern Art. We bailed out of the cab and I thrust a handful of notes into the cabbie’s hand to cover fare and tip as another couple dived into the vacant cab. The MoMA’s welcoming doors were locked and it was then I realised we had come to the back door. The entrance to the Museum, and the restaurant, were on W53rd St – a five minute dash around the block in the teeming rain.

At 7.25pm we breached the doors to The Modern restaurant and spent a few moments regaining our demeanour in the chic air lock before striding imperiously to the maitre D station looking for all the world like a breeding pair of otters.

The Modern Restaurant at MoMA

The first thing we noticed on entry to The Modern is that we were standing in a boisterous bar dining room; sleek and elegant, but hardly the refined dining space we expected. The crowd was Mad Men piss-elegant and the noise levels confronting. Still, on a Thursday night in the midst of a biblical rainstorm, it looked a pretty good venue to await the arrival of the ark.

We were guided around the perimeter of the bar room, led into the dining room proper and our table next to the window overlooking the sculpture garden courtyard. Settling in to our seats I ordered a couple of  Billecart-Salmon Brut Réserves to sip while we took in our surroundings and scanned the menu.

There’s a touch of Copenhagen about The Modern’s design ethic. It’s sleek, modernist and understated in everything from layout to furniture and tableware. The sculpture garden added an ethereal glow through the rain spitting off the   artfully lit statuary but the noise from the adjoining bar took the shine off anotherwise well-contrived setting; the lack of separation diminishing any attempts at intimacy.

And the rain still dripping off my suit formed small puddles on the slate floor beneath me.

Service was excellent for the most part, a couple of minor gripes to come. Canapés and an amuse bouche had appeared after the menus and we set about selecting our dishes with a high degree of anticipation. The complimentary morsels, by the way, were delicious and our bouches were indeed amused.

Dining comes two ways at The Modern. You can select from seven or eight options in each of a four-course prix fixe carte for $98pp or opt for an eight course Chef’s tasting menu (full table only) for $155pp and an add-on tailored matching wine tasting flight for an extra $135pp, if desired.

We chose to go the prix fixe route because, ever since my restaurant reviewing days, we prefer to select four different courses each and exchange plates mid-course, thus turning a four course meal into an eight-course degustation and reaping a much wider selection of the kitchen’s art.

After a few minutes I looked across the table to Michelle, who was staring back with that “fuck you, I’m not sharing” expression she sometimes gets when she jealously eyes a standout dish. “The Damier?” I enquired innocently, knowing her taste so well, and knowing that the eight course degustation was about to become seven because I too, intended to order it.

I flagged a passing waiter and asked if the Chef was French or German, such was nature of the menu and its smatterings of foie gras, truffles, sauerkraut and western European techniques. “He’s from Alsace” came the reply. “Aaah, he’s both!” I exclaimed. “Can you please tell us about the Damier?” I continued, thoughts of chess sets and Louis Vuiton crowding my sodden mind. “It’s a combination of foie gras and ten plus score wagyu beef served in a checkerboard pattern with a passionfruit gastrique” came the reply. That explained the ‘damier’ component – that classic design element used by LV as their signature style for decades. It also confirmed the two serves.

So here’s what we ordered: 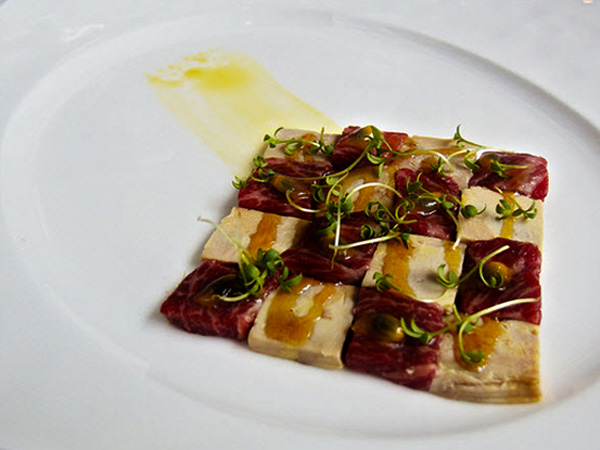 A decadent combination of two luxury staples that melted to a smooth unctuous paste in the mouth. The passionfruit gastrique cut through the richness just enough. A very ‘pretty’ dish artfully constructed, and surely a signature of its creator.

Grilled Sullivan county foie gras (sprinkled with bitter chocolate) and Long Island duck and foie gras ravioli. Have you spotted a theme yet?

Deciding to stick to ‘domestics’ from the vast Alsation-studded wine list I chose Palmina “Honea Vineyard” Arneis from Santa Ynez  near Santa Barbara on California’s central coast to accompany the first two courses. It’s crisp, floral nature helped cut through the richness of the goose liver and duck. 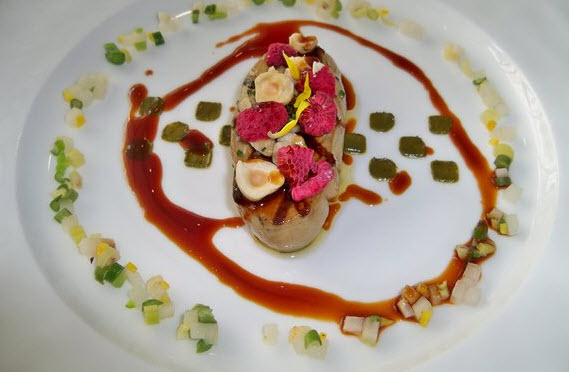 Keeping to the west coast, I selected an Oregon Pinot Noir; Adelsheim, “Willamette Valley” 2009 for it’s youth and lighntess of character. Both wines served their purpose well, providing a sound balance and foil to the dishes they accompanied. 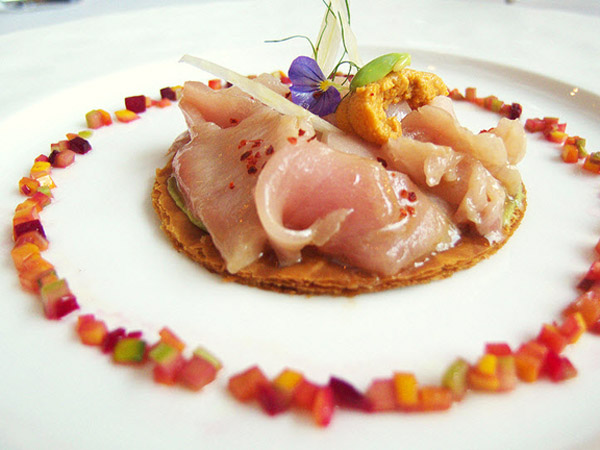 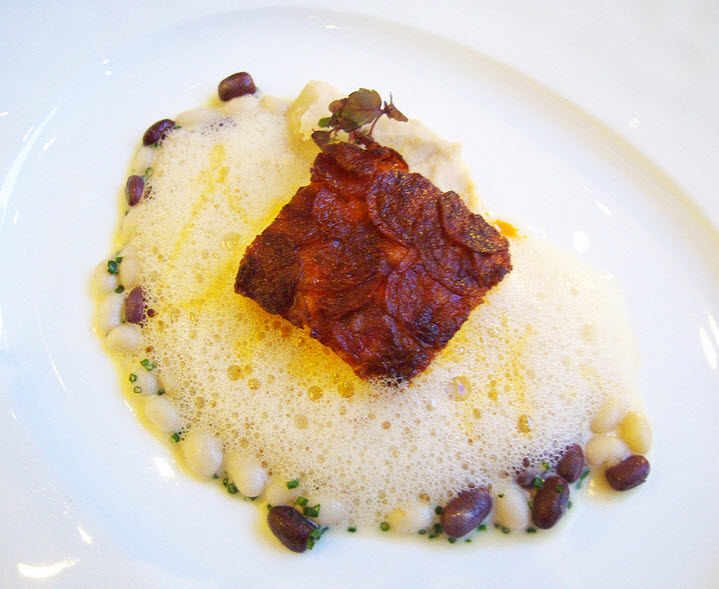 Desserts were, as with all previous courses, works of culinary art, almost too beautiful to eat. Almost. Unfortunately I was so distracted to note and photograph the dishes, but we were smitten by the Modern dining room’s chocolate cart and the random selection of chocolatey decadence it delivered.

The kitchen at The Modern expresses a memorable union of art, creativity and classic culinary technique, confirming that you eat with your eyes as much as your mouth. Each dish was skillfully prepared, presented and delivered in a service cadence that shows a high level of understanding and experience.

The ‘complimentary’ add-ons (canapes, amuses-bouche, chocolate taster and “ice-cream” finisher) add more value to an expensive restaurant, even by Melbourne standards, and the attentive but unobtrusive service was, for the most part, a delight.

My only gripe was the absence of any acknowledment or farewell from the otherwise outstanding floor staff once we’d settled the tab and took our leave. And the coat check door bitch had a tad more attitude than we liked.

Would we go back to The Modern? In a heartbeat! Do we recommend it? Abso-bloody-lutely. Just try to pick a dry day.